The MallARD platform was designed in response to the International Atomic Energy Agency (IAEA) 2017 Robotics Challenge which called for the design of a robotized platform to autonomously propel itself across the surface of a pond whilst carrying an optical sensor (the Improved Cerenkov Viewing Device, ICVD). The ICVD enables IAEA inspectors to confirm the presence of spent fuel underwater. MallARD passed the first round and was selected to participate in the second round in Brisbane, Australia.

Photo of the 3 entries in the nuclear fuel pond in Finland, Nov 2018. Photo credit IAEA.

Following the second round, MallARD was selected along with two other platforms to compete in the third and final round of the competition. Software improvements were made to the platform, as well as some mechanical modifications made by the IAEA. In August 2018 the IAEA inspectors visited our laboratory in Cumbria, REEL, where they were trained on MallARD’s deployment, use and trouble-shooting, before taking the platform to Vienna to conduct multiple inactive field tests. In November 2018, the IAEA deployed the MallARD platform in a spent nuclear fuel pool at a nuclear power plant in Finland. Mallard was deployed in two storage pools and functioned as specified and without fault in both environments. Of the three robots, MallARD had the best vertical and course stability, power and propulsion as well as trajectory control. However, the Hungarian team, Datastart, used a buoy-like design which in the end won the competition as it was easier to clean and decontaminate. Download the public report here.

Following the end of the IAEA challenge, and taking on-board the recommendations, the MallARD platform has been redesigned, allowing it to fit inside a Pelicase for ease of transport and deployment. The central ICVD payload housing has been removed, and can be used to house other sensor options depending on deployment scenario.

Developing mobile aquatic robots requires extensive testing in pool facilities. These are expensive to install and maintain and access can be restricted. Whilst we have a pool at our REEL facility in west Cumbria, it’s not possible for our Manchester-based researchers to access this facility every time code needs testing. Not to mention the problem of waterproofing everything for each test!

Our solution to this problem is Land-MallARD: a holonomic ground robot that mimics the physics (dynamic behaviour) of MallARD. It does this by running a simulation of the MallARD’s dynamic model: the ground robot drives as it is an omnidirectional boat propelled by thrusters. This speeds up software development by removing the need for extensive pool testing, software is the same on the ground vehicle and the boat platform. This is better than pure simulation as it uses real sensors, again the code remains the same and it serves as a low-cost solution, Land-MallARD costs approximately £500 in parts. 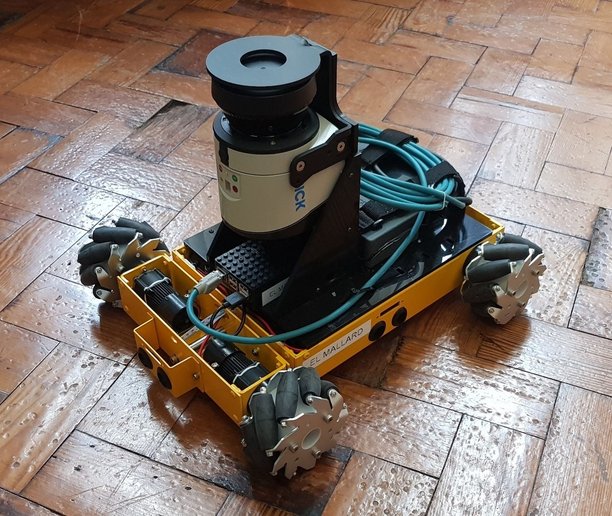 Embodiment of an Aquatic Surface Vehicle in an Omnidirectional Ground Robot